On the one hand, UTI is one of the most common bacterial infections in children younger than 2 years of age and could lead to sepsis acutely and theoretically renal failure in the long run. On the other hand, it is important not to over-diagnose UTIs because we know that overuse of antibiotics increases costs, side effects and leads to antibiotic resistance. The first principles questions very much apply here: who to screen, how to screen, and what to do with the screen results. There are risks associated with not having a standardized approach to diagnosing pediatric UTIs. In this EM Cases main episode podcast with Dr. Olivia Ostrow and Dr. Michelle Science we discuss an approach to diagnosing pediatric UTIs whilst revealing some common pediatric UTI myths and misperceptions….

There is substantial overlap between a true urinary tract infection (UTI) and asymptomatic bacteriuria leading to over-diagnosis and treatment in otherwise healthy children who presents with fever of unknown source. In a retrospective cohort study done at Hospital for Sick Children in Toronto, they looked at otherwise healthy children aged 12 weeks to 18 years who were discharged from the ED with the diagnosis of UTI [1]. Almost all were provided with an empiric antimicrobial prescription. Forty six percent of these children did not truly have a UTI. Their urine cultures were negative. In the era of Choosing Wisely, we are clearly over-testing, over-diagnosing and over-treating pediatric UTI.

Urosepsis is rare in otherwise healthy, immunocompetent children. The risk of developing sepsis from a UTI has been estimated to be only 1 in 25,000 [2]. However, the risk of an untreated UTI progressing to sepsis is higher in infants compared to older children.

In order to promote stewardship and reduce risk for harm, screening should be standardized integrating the pretest probability of a UTI diagnosis based on individual risk factors.

While the presentation in infants is very non-specific and can include vomiting, poor feeding, lethargy, failure to thrive, jaundice, or isolated fever, older children who are toilet trained are more likely to present with the classic symptoms of UTI including dysuria, frequency, hematuria, incontinence, back pain, and abdominal pain. Observational data reveal that 7% of children 2-24 months of age presenting to the ED with isolated fever without a source have a UTI [6].

Diagnostic accuracy of UTI signs and symptoms in infants

The signs and symptoms of UTI in infants <24 months of age that have likelihood ratios greater than two (+LR ≥2) include [3]:

Pearl: Clinically obvious source of infection decreases the likelihood ratio by half.

Pitfall: Assuming that “history of UTI” is always a true UTI that puts your patient in a high risk category for UTI when they present with fever without a source, is a common pitfall that leads to overdiagnosis and overtreatment.

All infants ≤ 8 weeks with a fever need to have a urinalysis and culture, unless there is an obvious source of infection (does not include an upper respiratory tract infection) because they present with non-specific symptoms and have a higher risk of serious bacterial infection.

UTICalc is a retrospectively derived calculator that estimates the pretest probability of UTI [4]. It requires prospective validation, but is nonetheless a helpful guide in determining which children require urine testing and, when urinalysis is completed, what the likelihood of UTI is.

*Other fever source can include (but is not limited to): acute otitis media, upper respiratory tract infection (i.e., any cough or congestion), gastroenteritis, pneumonia, meningitis, bronchiolitis, and viral syndrome.

If risk of UTI <5% based on UTI Calc, suggest no empiric antibiotics while waiting for culture results.

If risk of UTI 5% based on UTI Calc, treat empirically with antibiotics.

For children ≥2 years of age, the presence of urinary symptoms (dysuria, frequency, hematuria, abdominal pain, back pain or new daytime incontinence) can be used as a criterion for urinalysis and culture.

Pearl: It is very rare for males to have their first UTI after 3 years of age in the absence of instrumentation of the urinary tract. A thorough search for an alternate diagnosis of fever is prudent in the older male child.

Pitfall: Prepubertal girls can develop nonspecific vulvovaginitis (dysuria, erythematous vulva) from poor hygiene or exposure to bubble bath or other irritants; urine cultures will be sterile but this problem is often inappropriately treated as a UTI.

Do patients with febrile bronchiolitis require testing for UTI?

How to obtain urine specimens in children

Children who are not toilet-trained

While urine bags should not be sent for culture due to high risk of contamination (up to 63%), they have been shown to be an effective screening method to exclude UTI diagnosis [7]. All positive urine bag dipsticks/urinalyses must be confirmed with a catheterized or mid-stream specimen before sending for culture.

Pitfall: A common pitfall is sending a bag urine for culture. The contamination and false positive culture rate is unacceptably high. While a bag urine sent for urinalysis is an effective screening method for pediatric UTI, they should never be sent for culture.

This technique involves 3 providers for patients up to the age of 2 years. The patient is fed 25 minutes prior. One provider gently taps the suprapubic area at a frequency of 100 taps per minute, for 30 s. The other provider then massages the lumbar paravertebral area in the lower back for 30 s. Both maneuvers are repeated until a clean catch urine sample is collected by a 3rd provider. 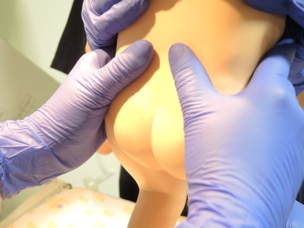 Dipstick urinalysis is commonly used in the ED to support the diagnosis of a UTI, but it has poor specificity, especially when nitrates are negative. This can lead to over diagnosis of UTIs; 49% of patients with presumed UTI based on urine dipstick had negative urine cultures in a recent study [10].

No single element of a urinalysis is sensitive enough to rule in or out UTI.

Nitrites are highly specific but not sensitive for UTI.

Leukocyte esterase is sensitive but not very specific for UTI.

If urinalysis of fresh (less than 1 hour since void) urine yields negative leukocyte esterase and nitrite results, then it is reasonable to monitor the clinical course without initiating antimicrobial therapy (watchful waiting), recognizing that a negative urinalysis does not rule out a UTI with certainty.

Does delayed treatment cause renal scarring and hypertension?

This is controversial. The AAP guidelines [6] suggest that delays in appropriate treatment could increase risk of renal damage. Some studies suggest that early and aggressive antibiotic therapy within 72 hours is necessary to prevent renal scarring. However, none of these studies looked at patient-oriented outcomes or long-term complications such as chronic renal failure and hypertension. We do not know, based on current literature, if treating pediatric UTI prevents clinically relevant renal disease.

If the patient is at high risk for UTI according to UTI calc (>5%) or gestalt, or has comorbidities or appears ill/septic:

It may be appropriate to treat with antibiotics empirically. Discuss with the family the need to have the culture results reviewed to make the definitive diagnosis (and either continue therapy or stop it based on the culture results).

Blood tests have not been shown to be a reliable marker to differentiate between cystitis from pyelonephritis based on a 2015 Cochrane review [12] .

ESR does not appear to be sufficiently accurate to be helpful in differentiating children with cystitis from children with pyelonephritis.

CRP. A low CRP value (<20 mg/L) appears to be somewhat useful in ruling out pyelonephritis, decreasing the probability of pyelonephritis to <20%. However, conflicting evidence precludes definitive recommendations.

Procalcitonin seems better suited for ruling in pyelonephritis, but the limited number of studies and conflicting data precludes definitive recommendations.

The AAP guidelines [6] suggest that oral therapy is adequate for well-appearing children over 2 months of age with UTI. A 2018 study showed no clear benefit of a single dose of IV antibiotics in the ED for patients who then have outpatient oral antibiotic treatment [13]. Unless the child is septic or unable to tolerate oral intake, oral antibiotics seem to be as effective as IV antibiotics for children with UTI.

Guidelines agree that there should be a minimum duration of 2 to 3 days for lower UTI and 7 days for treatment of upper UTI for children >2 years of age [14]. For infants <2 years of age, treat for 7 days. The distinction between upper and lower UTI can be challenging, especially in younger infants.

Example of antibiotic choices for pediatric UTI (at Hospital for Sick Children):

If the child has had a previous UTI, then always look at previous culture and susceptibility patterns to guide empiric treatment.

Imaging for pediatric UTI in the ED

The latest AAP Guidelines [6] no longer recommend voiding cystourethrogram (VCUG) after a single UTI. AAP and CPS guidelines [15] both recommend children <2 years of age should be investigated with a renal bladder ultrasound after their first febrile UTI to identify any significant renal abnormalities, based on poor evidence (level C). There is no convincing evidence to suggest that ultrasound improves patient-oriented outcomes, and ultrasound imaging may lead to further invasive testing that may cause harm. While there may be a role for ultrasound in follow-up to pick up anatomical abnormalities, there is little, if any role for ultrasound in the ED for pediatric UTI.

Infants up to 28 days of age with a fever should be admitted to hospital but disposition is more controversial for older infants. There is good evidence to suggest that well-appearing children >2 months of age with a diagnosis of UTI who are tolerating oral fluids and have stable vital signs can be discharged home on oral antibiotics [15].

Factors to consider for hospital admission: 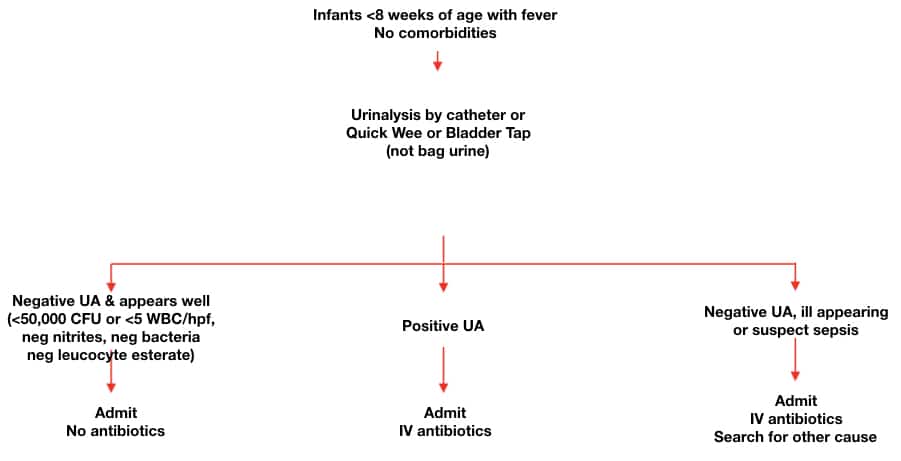 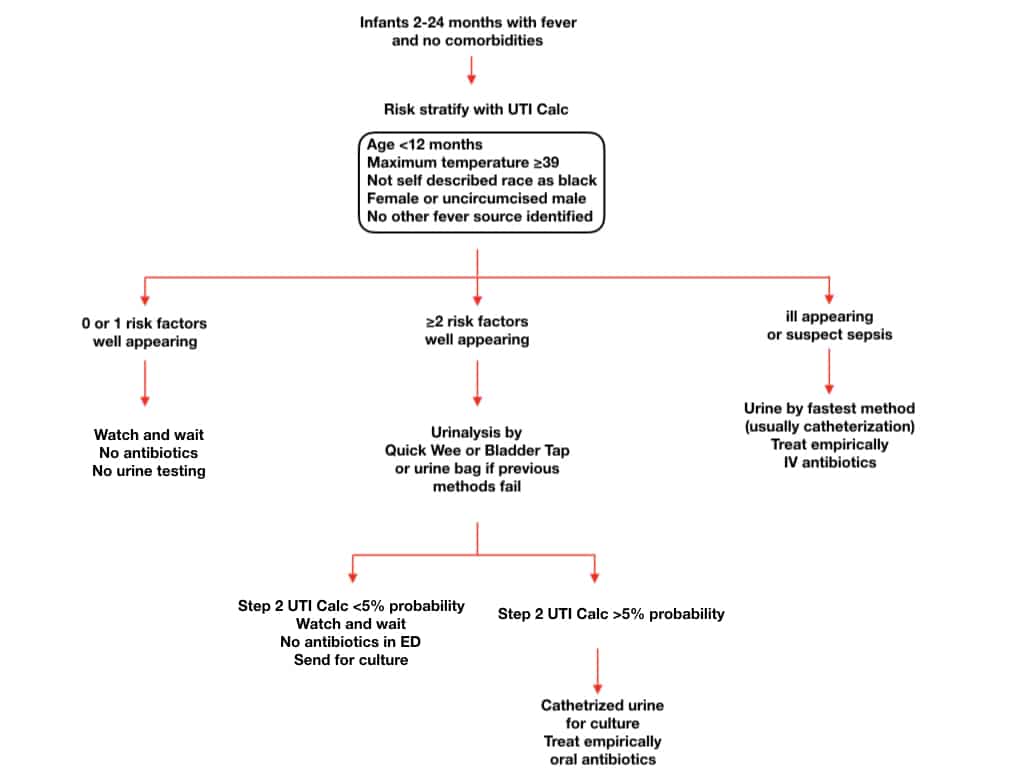 Drs. Helman, Ostrow and Science have no conflicts of interest to declare

Other FOAMed Resources on Pediatric UTI

SGEM We are not the Champions of Pediatric Urine Samples