Among the presentations seen in the ED, few command the same respect as status epilepticus. It is, in itself, both a diagnostic dilemma and, at times, a therapeutic nightmare. There’s a reason it’s the very first domino to fall in the dreaded sequence “seizure, coma, death”. Status epilepticus can be nuanced to manage. Sure, most seizures self-abort or love an IV dose of lorazepam, but ask anyone who’s been down the propofol route, and they’re not likely to have forgotten the time they stared down a patient who just…would…not….stop. Dr. Paul Koblic and Dr. Aylin Reid return for a deep dive into the nuances of ED management of status epilepticus, and suggest a treatment algorithm based on the latest evidence and consensus opinion…

Most seizures resolve spontaneously in 1-3 minutes. However, by the time the seizure is identified, physician is notified and attends to the patient, IV access is obtained, drugs are drawn up and given, most actively seizing patients who have not already stopped seizing will be in status epilepticus.

Note that patients who cease to display tonic clonic seizure may continue to have non-convulsive status epilepticus that can only be detected on EEG.

Choose one of the following first line options (Level A evidence):

If neither of these 2 options are available, choose one of the following:

In patients without established IV access, IM midazolam is preferred. However, the most important determinant of benzodiazepine efficacy in terminating seizures is time to administration rather than choice of benzodiazepine or the choice of route. The longer a patient seizes, the more refractory to medications they become.

Pitfalls: In the emergency management of seizures, the biggest pitfalls are underdosing benzodiazepines and dosing too late!

Should benzodiazepines be administered in seizures < 5 minutes?

Some experts recommend waiting 5 minutes before administering the first anti-seizure medication and giving them slowly over a few minutes because the majority of seizures resolve spontaneously in <5 mins and these medications at therapeutic doses have significant side effects. However, apnea and hypotension are more common with ongoing seizure activity. Aborting the seizure results in less respiratory depression, despite the higher benzodiazepine dose. Our experts

recommend not waiting 5 minutes before giving the first dose of benzodiazepine, and to give it IV push ideally. In reality, the vast majority of patients who seize in the ED – by the time we draw up the first medication and are actually giving it, several minutes have lapsed and the patient is likely to be in status epilepticus or nearing status epilepticus.

Pearl: Draw up multiple doses of benzodiazepines at the same time at the beginning of the resuscitation to be ready for second dose as needed

Choose one of the following equivalent second line options as a single dose:

In adults and children with persistent benzodiazepine refractory generalized convulsive SE, it was found that there was no difference between the use of levetiracetam, fosphenytoin and valproate in seizure cessation and improved alertness by 60 minutes. 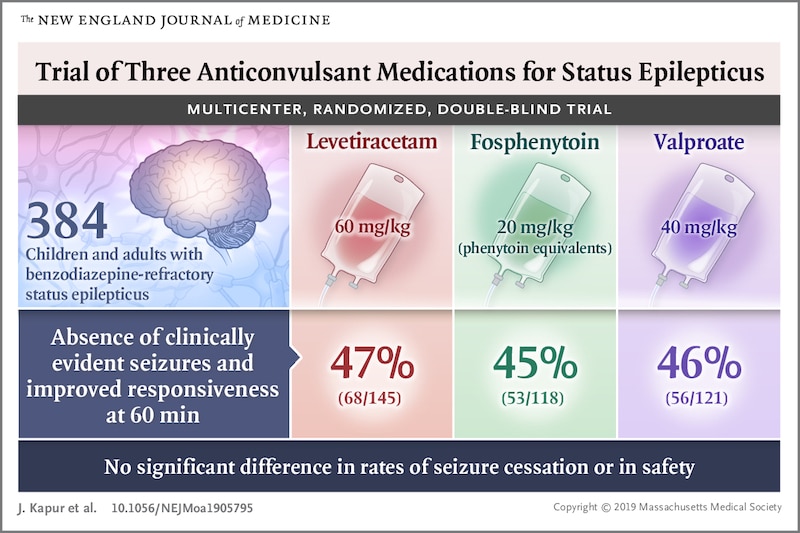 The efficacy of phenytoin and fosphenytoin for time to seizure cessation are comparable, however there are theoretical reasons why fosphenytoin might be preferred: 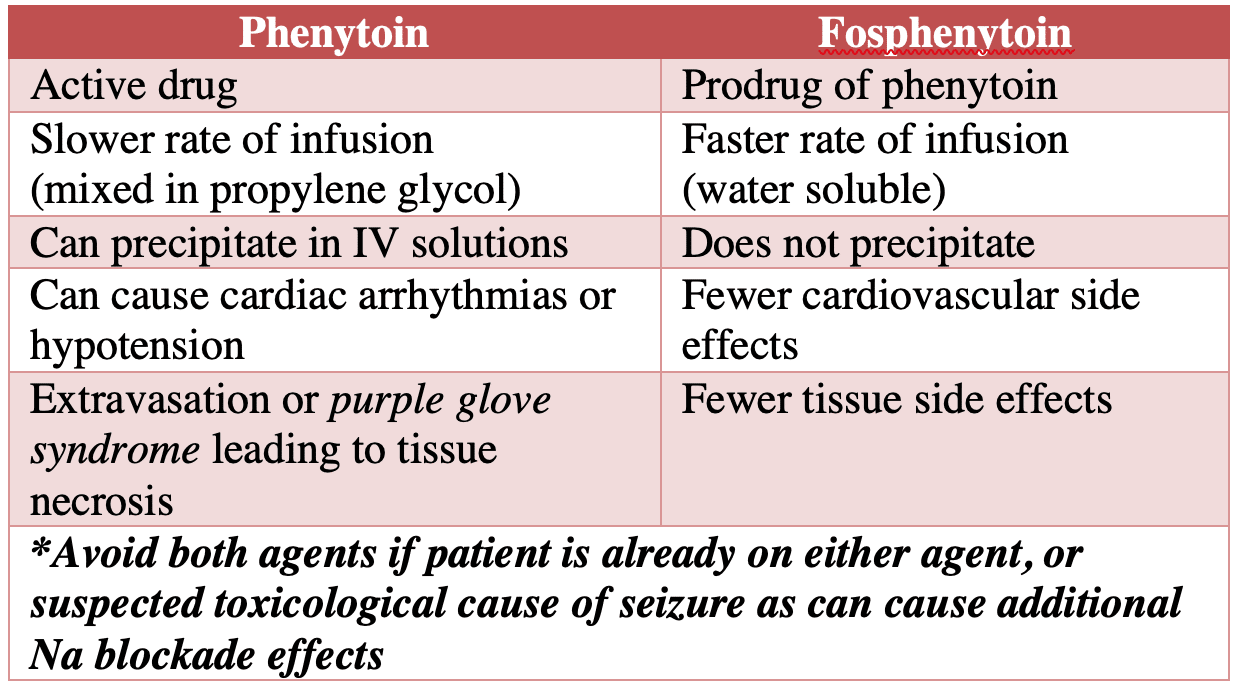 Phenytoin and fosphenytoin have sodium channel blockade effects, which is similar to the mechanism of action of certain toxidromes such as TCA and cocaine overdose. The additional Na channel blockade of phenytoin/fosphenytoin can result in cardiac dysrhythmias/CV collapse. These drugs should generally be avoided in toxicological causes of seizure for this reason.

If a patient has a known seizure disorder and is already taking phenytoin, our experts recommend choosing a different medication. Drug levels take time to result and if they are already therapeutic on phenytoin, then it is unlikely that loading them with more would be unlikely to be efficacious and likely to increase the incidence of cardiotoxicity.

Use of propofol as second line agent in status epilepticus

There is emerging literature to support the use of propofol as a second line anti-epileptic in tandem with traditional second line agents but controlled data is limited.

All second line medications recommended by the guidelines take time to draw up and time to infuse, therefore taking a long time until cessation of seizure (examples are ConSEPT and EcLIPSE trials in children showing 30-45min until cessation of seizure). Propofol is readily available, familiar, can be given quickly, and has a rapid onset of action. In addition, it is a safe option in the suspected toxicological case.

Update 2019: A study by Burman in 2019 of pediatric patients in South Africa showed that  phenobarbital at 20mg/kg +/- repeat 10mg/kg x2 was superior to

If the patient continues to seize after first and second line treatment, they are in refractory status epilepticus. Therapeutic options include midazolam infusion, ketamine or another second line anti-epileptic medication not already used.

The longer convulsive SE continues, the less convulsive it appears clinically, and continuous EEG monitoring should be instituted as soon as feasible. 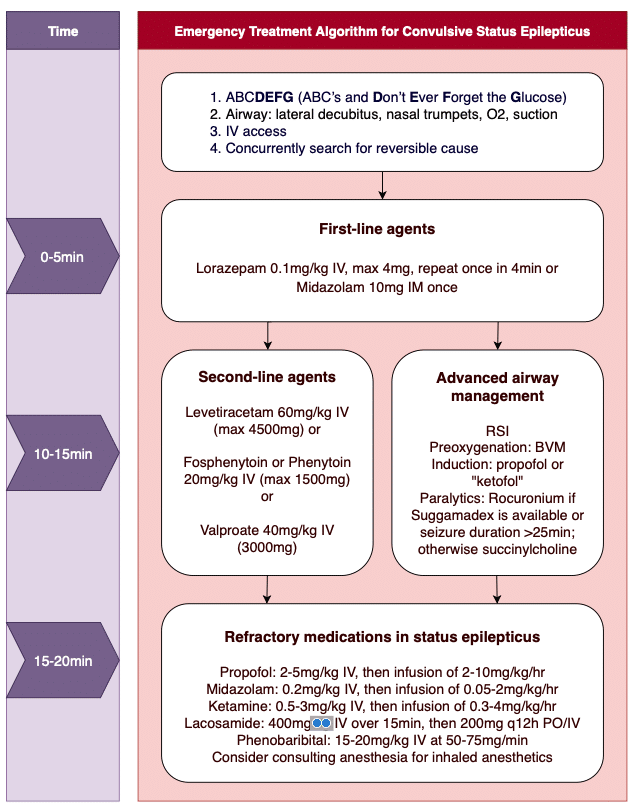 Why intubate?
Predicted clinical course of prolonged seizure with respiratory depression with use of escalating doses of benzodiazepine

When to intubate?
1. If aspirating or apneic
2. If no response to first adequate dose of benzodiazepine

Have on hand rescue vasopressors as needed.

Paralytic: Roc vs Succs
Our experts recommend using a paralytic agent to maximize your chance of first pass success in status epilepticus patients. There is no evidence showing that any particular paralytic improves outcomes in status epilepticus over another. Long-term neuromuscular blockade should be avoided so that clinicians can monitor for ongoing seizure activity and conduct

serial neurological exams until EEG monitoring is available. The choice of paralytic agent depends on patient factors, duration of seizure activity and access to the Rocuronium reversal agent, Sugammadex. If there are no clear contraindications for using succinylcholine and the patient has been seizing for <20-25 min, it is reasonable to use succinylcholine given its short duration of action. If Sugammadex is available then rocuronium can be considered. Suggamadex should only be used in a controlled fashion to reverse the rocuronium after the airway has been secured and the patient has been stabilized. Its purpose in status epilepticus is only to reveal underlying physical seizure activity to aid in titrating sedative infusions, rather than as a tool to be used for an anticipated difficult/challenging airway.

Other FOAMed Resources on Emergency Management of Status Epilepticus

Drs. Helman, Koblic and Reid have no conflicts of interest to declare