We see patients with toxic alcohol poisoning most commonly in three clinical scenarios. One, which is usually relatively straightforward, after an intentional suicide attempt where they tell you exactly what they took; the next scenario is a bit more challenging – when they come in agitated and won’t give you a history and the third – also very challenging – the inebriated patient found down. Alcohol is everywhere, and inevitably inebriated people show up at your ED with a myriad of medical and psychiatric problems – we’re all familiar with these patients. Or they are simply very drunk. And most of them just need to sober up and can be sent home. But, it’s our job as ED professionals, not only to identify traumatic, medical and psychiatric catastrophes in these patients but also to identify and manage the relatively rare but potentially life and sight threatening toxicologic diagnoses in the inebriated or agitated patient. And that isn’t so easy – especially when it comes to toxic alcohols.

So, in this Episode #106 Toxic Alcohols – Minding the Gaps – Recognition and Emergency Management, we’ve got the mighty return of two of my favorite brilliant Toronto based toxicologists –Margaret Thompson, the medical director of the Ontario Poison Control Centre, and the blossoming toxicology educator extraordinaire Emily Austin to help give you the knowledge of toxic alcohol poisoning recognition, clinical and lab clues, limitations of the osmolar gap, goals of management, time sensitive treatments and more…

Alcohols can be divided into two broad groups based on presentation, pathophysiology and management:

Methanol is commonly found in windshield-wiper fluid and de-icing products, as well as paint removers, shoe dyes embalming fluid, and surprisingly a number of Windex products.

Diethylene glycol is also found in some anti-freeze products, and has caused outbreaks of renal failure after being inadvertently being substituted for sucrose.

Isopropanol is found in rubbing alcohol, hand sanitizer gels and other antiseptic preparations.

Practical Pearl: Call your local poison control center and request a product identification for products that you are unsure of the the contents. 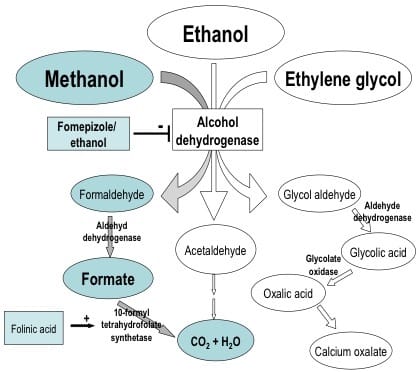 While most toxic alcohol ingestions are recognized either on history or the finding of an anion gap metabolic acidosis, there are sometimes clinical clues that, if recognized, can lead to early initiation of time sensitive treatments. Early signs of both methanol and ethylene glycol toxicity are the same as for ethanol. When the alcohol is absorbed, before it is metabolized, these substances do cause GI upset (potentially nausea and vomiting), inebriation, slurred speech, nystagmus etc. As the alcohol is metabolized to an acid, hypotension develops, tachycardia, tachypnea, fixed dilated pupils for methanol, depressed level of awareness and potentially seizures. The symptoms usually develop over 6-24hrs but can be delayed up to 4 days if ethanol is coingested.

The 4 clinical clues to toxic alcohol poisoning are:

Blood tests should not necessarily be ordered on every inebriated patient in the ED. For patients with any suspicion for a toxic alcohol ingestion, consider ordering a venous blood gas, calculated anion gap, osmolality, BUN, electrolytes and ethanol to calculate an osmolar gap, lactate, ketones and ASA level to sort out the anion gap metabolic acidosis and serum calcium.

The 5 big lab clues to toxic alcohol poisoning are:

Clinical Pearl: The differential for a metabolic acidosis with a very low bicarbonate level of 1 or 2 is small – severe sepsis, metformin induced and toxic alcohols. 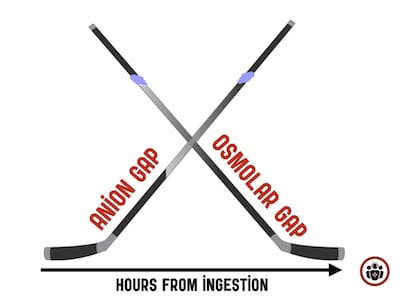 3.Low ethanol level in an intoxicated patient. While an ethanol level does not need to be drawn in every patient who presents to the ED inebriated, the serum ethanol may be a clue to a toxic alcohol ingestion. The patient with a decreased LOA with a negligible ethanol concentration must be investigated for other pathology. Ethanol is metabolized at the rate of ~ 5.5 mmol/L/hr in an induced patient. You can predict when the serum ethanol level should be low enough for that patient to mobilize safely out of the ED. If the patient is not improving in that estimated time, rethink the diagnosis and re-assess. For the toxic alcohol ingestion patient, who has co-ingested ethanol, the patient has treated themselves (for the time being), and does not need another intervention. Finally, the serum ethanol must be taken into account when calculating the osmolar gap.

Pearl: The triad of acidosis, high osmolality and low or zero ethanol level is highly suspicious for a toxic alcohol ingestion.

4.Hypocalcemia with a prolonged QT is sometimes seen with ethylene glycol toxicity as the calcium is bound to oxalate and deposits in the kidneys causing renal failure and in the brain causing the late findings of parkinsonism and basal ganglia hemorrhages.

A delay in initiating treatment of toxic alcohol poisoning leads to worse outcomes. Do not wait for serum toxic alcohol levels to initiate treatment.

Note that there is a paucity of high level evidence for the following recommendations.

Prevent toxic metabolites: Consider fomepizole ideally within 30 minutes. If you do not have access to fomepizole, consider ethanol.

Fomepizole dosing: loading dose of 15mg/kg, then 10mg/kg q12h for the first 48 hours, after which the dose is increased to 15mg/kg q12h

Correct acidosis with a bicarbonate infusion to target pH = 7.2.

Consider dialysis: Dialysis may not be required if fomepizole is started early in ethylene glycol poisoning assuming there is no acidaemia or renal dysfunction. Methanol is eliminated too slowly for antidotal treatment alone to be effective and so usually requires dialysis.

Note that there is little, if any, role for GI decontamination in toxic alcohol ingestion because of rapid gastric absorption. NG suction may be considered within 30 minutes of ingestion.

Pitfall: A delay to dialysis in methanol poisoning is a common pitfall leading to poor outcomes. Call your nephrologist early!

Indications for fomepizole or ethanol in toxic alcohol poisoning

Think of isopropyl alcohol poisoning as ethanol on steroids

Isopropyl alcohol, while techically is not a toxic alcohol, can cause morbidity and mortality and is more commonly ingested than the toxic alcohols.  Isopropyl alcohol poisoning presents similarly to ethanol poisoning only more severely with coma and cerebellar signs, and it has more of a predilection for hemorrhagic gastritis and pancreatitis. Don’t ignore abdominal complaints in patients with a history of alcohol misuse!

Isopropyl alcohol is about twice as inebriating as is ethanol (for any particular load or blood level) and lasts twice as long.

Purssell RA, Lynd LD, Koga Y. The use of the osmole gap as a screening test for the presence of exogenous substances. Toxicol Rev 2004; 23:189.

Other FOAMed Resources on Toxic Alcohols

EMDocs on The Unhappy Drunk

Sinai EM on What’s the gap?

Core EM on the basics

PulmCrit on limitation of Osmolar gap

Drs. Helman, Austin and Thompson have no conflicts of interest to declare.