Much has changed in recent years when it comes to TIA risk stratification, workup and antiplatelet therapy. In this podcast we use the overarching theme of timing to elucidate how to distinguish true TIA from the common TIA mimics, the importance of timing in the workup of TIA, why the duration of therapy with dual antiplatelet therapy and timing of starting anticoagulation in patient with atrial fibrillation, contributes to the difference between preventing catastrophic strokes and causing intracranial hemorrhage. Remember that stroke is a leading cause of adult disability and is the third leading cause of death in Canada. It’s time we paid more attention to TIA…

The ED misdiagnosis rate of TIA has been reported to be between 5% and 31%, which can lead to needless workups, iatrogenic complications and morbidity. The three mimics that are often not obvious on history and physical are migraines, seizures and psychiatric disorders. Distinguishing these from TIA is mostly in the timing of symptom onset, associated symptoms and presence of “positive” vs “negative” symptoms. It is important to consider a few of the less common underlying causes of TIA in the ED as these have time-sensitive workups and therapies. 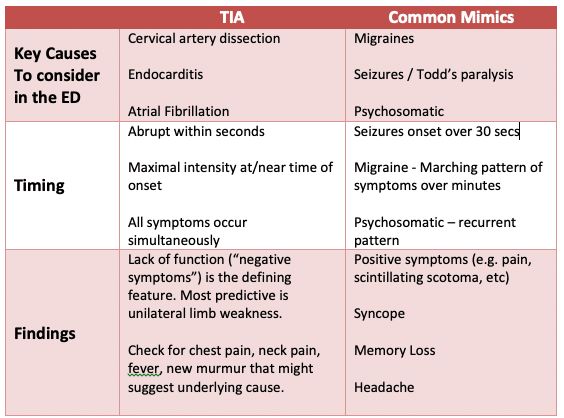 An observational study from 2014 shows that memory loss, headache, and blurred vision were associated with mimics, while unilateral weakness was associated with true TIA.

TIA risk stratification – the death of the ABCD2 score

The importance of risk stratification for TIA lies in the questions: what’s the chance that a TIA patient you see in the ED will have a stroke in the next 2 days? 90 days? And can we identify the patients who are eligible for a carotid endarterectomy fast enough to prevent that stroke?

There exists an alarming 12-20% 90 day stroke risk in those presenting with high risk TIA symptoms. Half of these patient suffer from a stroke in the first 48hrs. A 2016 NEJM study fortunately found that this high risk can be reduced to less than 4% with rapid follow-up and aggressive secondary prevention. Based on these findings, it is good practice for high risk TIA patients to be worked up in the first 48 hours.

So which patients who present with TIA symptoms are high risk?

While the CHADS2VASC helps identify AFib patients at risk for future embolic event, The ABCD2 score has been the most ubiquitously used risk stratifying tool in ED since its inception. The elements of the ABCD2 include:

More recent studies by Stead and Ghia have failed to validate the ABCD2 score and have shown that the score is neither sensitive nor specific and is inaccurate, at any cut-point. In 2011, Perry’s external validation of the ABCD2 found that by using this score, physicians were misclassifying up to 8% of patients as low risk. Sensitivity of the score for high risk patients was found to be only 31.6%.

As recognized in the latest iteration of the Canadian Heart and Stroke Guideline from 2018, the most important prognostic feature of the ABCD2 score appears to be the Clinical features:

The bottom line: high risk patients are the ones with either true motor deficit of a limb or face or a speech deficit. This is important not only to determine who needs a rapid workup to assess eligibility for carotid endarterectomy and hopefully prevent a catastrophic stroke, but also to identify those patients who will likely benefit from dual antiplatelet therapy.

Workup of high risk TIAs – the time to investigate is now, with CTA

CT angiogram of the head and neck improves identification of clinically significant stenosis amenable to endarterectomy compared to carotid doppler ultrasound as well as diagnose both carotid and vertebral artery dissection as a cause for the TIA.

Moderate risk patients*: a) CT/CTA or MRI/MRA (aortic arch to vertex), b) If you don’t have quick access to CTA, an ultrasound of the carotids is an acceptable option.

Which TIA patients need an urgent echocardiogram and/or holter monitor?

Cardio-embolic pathology are a non-trivial source of TIAs and stroke. Five percent of patients with TIA will have atrial fibrillation found on cardiac monitor within 24hrs. 15-20% will have paroxysmal atrial fibrillation on cardiac monitoring within 4 weeks. It is important for these patients to be identified early so that appropriate anticoagulation therapy can be started to prevent further cardio-embolic phenomena.

Those patients being admitted will likely have a full work-up as an inpatient. For patients being considered for outpatient management, which of them requires a holter monitor and echocardiogram to help guide management?

Dual antiplatelet therapy (DAPT) for TIA – again, timing is everything

Platelet antagonism is the cornerstone of TIA therapy. Knowing what to give and, more importantly, when to give it has not always been so clear. Timing your therapy can make the difference between preventing an ischemic event and causing a life-threatening hemorrhage.

The MATCH trial in 2004 studied DAPT compared to clopidogrel alone in 7600 patients. This study found little benefit for DAPT and did note a clinically significant increase in major bleeds. However, the inclusion criteria were for patients having had a TIA in the preceding 6 months. The treatment period was for up to 2 years.

The EXPRESS trial in 2007 clearly demonstrated that early management of TIA results in 80% reduction in early stroke risk. This early therapy was not a priority in the MATCH trial.

Three more recent trials helped demonstrate that the major benefit of DAPT exists early in the course of treatment and the major risks occur later. If DAPT was started appropriately early (usually within 24-72hrs) and not extended beyond 3 weeks, a 1.5-3.5% decreased risk of stroke was found, without significant increased risk of major bleeding.

Our experts therefore recommend immediate loading of DAPT (unless already taking ASA or clopidogrel) for high risk patients and dosing in the following fashion:

Clinical Pearl: For those patients receiving 3 weeks of dual antiplatelet therapy, prescribe a PPI for gastric mucosal protection, our experts recommend pantoprazole because the other PPI’s affect the cytochrome P450 system and may impair the activation of clopidogrel.

There’s that timing theme again. If you’re sure it’s a TIA with rull recovery within one hour (no residual symptoms) and a normal CT, consider starting anticoagulation (DOAC or warfarin) in the ED. If you’re not sure, consult your neurologist.

It is important to understand that for patients with a completed ischemic stroke, with known atrial fibrillation, who are not anticoagulated at the time of their stroke, anticoagulation is not indicated immediately in the ED. Rather, an anticoagulant should be started at a later time during their admission depending on the severity of the stroke.

We don’t think twice about admitting stroke patients who present outside the thrombolytic window. However, it is high-risk TIA patients that may benefit most from admission for a rapid workup and endarterectomy that may prevent a catastrophic stroke. We can save a high-risk TIA patient from having a massive CVA, but once they’ve stroked out, the benefit of admitting them is far from huge.

Practically, if you can get a CTA in the ED, and it’s negative, outpatient management within 48hrs is reasonable.

If CTA shows carotid stenosis amenable to endarterectomy, admission is advisable. Time is essential – the highest risk time is the first two days and then the first two weeks. Therefore, surgery should be done with 2-14 days after the TIA – the sooner the better. This reduces the risk of a major stroke from 26% over 2 years to 9% – a 17 % absolute risk reduction. The absolute risk reduction is 30% if done within 2 weeks.

Other FOAMed Resources on TIA

EM Literature of Note on disposition of TIA

Drs. Helman, Himmel and Dushenski have no conflicts of interest to declare